I suppose it must be the same for all school kids as they work their way through successive years at school. They all think there was no year quite like their year - no-one quite so special as them. I know we felt like that, but I think we had some justification, you see we were the very first pupils to attend Cumbernauld High School.

Prior to the intake of August 1964, pupils in Cumbernauld who had achieved better marks in the "eleven plus" examinations traveled by bus daily to Lenzie Academy, whilst those who had not done so well attended Cumbernauld Junior Secondary in the village. 1964 was to change all that. The growing population could now justify the building of a new secondary school in Cumbernauld, and with the move towards comprehensive education which was prevalent at that time, it meant that all pupils leaving all of Cumbernauld's non-denominational primary schools that year, would for the first time attend the same secondary school, irrespective of the grades they achieved in their "eleven plus" exams. 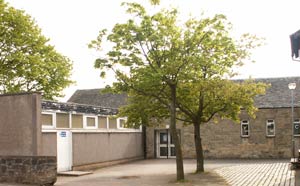 The CDC had started building the new Cumbernauld High School just off the Kildrum ring road, but it was nowhere near completion, and would not actually be ready to accept pupils until August 1965. That meant the dreaded phrase "temporary accomodation", which had been used so many times before in the short history of the New Town, would be trotted out once more.

The site chosen for that first year of Cumbernauld High School's existence was the Kildrum Community Centre, which was and indeed still is situated to the rear of the Kildrum "Y" Centre. From the pupils viewpoint, this had the definite advantage of being beside Dyson's, which was the name which the shop in the adjacent farmhouse went under at that time. I'm sure their sales of crisps and fizzy drinks must have increased tenfold during the time that Cumbernauld High School was situated there. On the downside, it wasn't really big enough, so the Cumbernauld Village School was also used, and I remember having all the Chemistry, Physics, PE and Music classes in the village school. As can be seen from the photograph below, the playground was also pretty small and the steep slope was hardly conducive to playing football in the breaks.

For the class I was in, the timetable was structured so that all the classes we had in the village were on Monday, Wednesday and Friday afternoons. We therefore did not have the luxury that some classes did of being transferred between the Community Centre and the Village School (shown below), by bus. This meant rushing home and bolting lunch, followed by a mad scramble over to Seafar and the steep and winding path down to the village. It was steep going down, but when school finished, it seemed even steeper and never ending when climbing up it to go home.

You could always wimp out and go to the bus stop which at that time was across the (single carriageway) road from the Spur Hotel. Some pupils would even "thumb" a lift to the top of the Wilderness Brae.

It was however considered more macho to walk back up the footpath and the really athletic types had a sort of unofficial contest to see who could get to the top of the hill first.

Mind you, there wasn't always a rush to get back up the hill to the new town. The village bosted the only proper shops in the town. The temporary shopping centre which Cumbernauld boasted, prior to the opening of phase one of the current centre, always seemed like just that. Temporary and second best. Although Retson's had a hairdressing shop in the temporary centre, Big Jack's barber shop in the village won hands down with us and was a frequent haunt after school on Friday afternoons where one of us would have a haircut and three or four others would while away the time insulting the person in the chair or writing the inevitable punishment lines we seemed to attract like magnets. It would be many years before we found out, but Big Jack led a double life. By day, he was "The Barber of Cumbernauld", but opera wasn't really his thing. When we were several years older, it came as a surprise to find Big Jack strumming his guitar rather than stropping his razor, performing in the local pubs as half of a folk duo in the style of the Corries.

The Village school did at least have a football pitch, although like all good golf courses there was a water hazard. The burn running along the length of the pitch would eagerly swallow up the ball several times in the course of each game, provoking energetic debates about who had put it in the burn and therefore who should retrieve it.

The girls had no such facility for outdoor hockey and would need to wait for the move to the new Cumbernauld High School building before that became a reality. It would be several years after that before male hockey was put on the curriculum. The female PE teacher at that time was a minor celebrity. Olive Wallace was the wife of footballer Willie Wallace, who although a prolific goalscorer for Hearts and a Scottish Internationalist, had still to achieve the legendary status he would later enjoy as a member of the iconic Lisbon Lions team after his transfer to Celtic for the bargain basement price of £29,000.